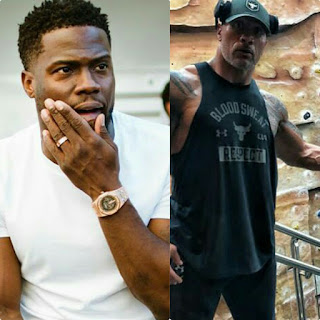 One of America’s biggest comic actor, Kevin Hart recently trolled fellow actor and former WWE wrestler, Dwayne Johnson, popularly known as The Rock, over a picture he posted on his Instagram handle as the wrestler was seen holding the mouth of a crocodile.

The picture drew lots of attention from his followers as a lot of people who dropped their comments on the post find it very frightening for him to play with such a dangerous animal. In the picture, The Rock was seen sitting on the crocodile and holding tight it’s mouth with his bare hands which cause Kevin Hart’s response. 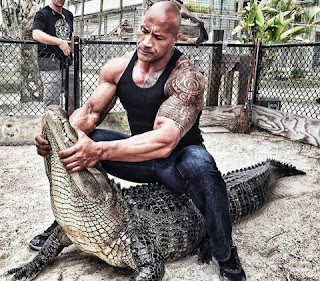 After sharing the picture, The Rock wrote:

Gorillas weren’t the only animals i spent time with for my RAMPAGE research.
Luckily, I’m a country boy who lives only a few miles from the swamps of the Florida Everglades.
I do a lot of fishing and trucking here and there and these gators are some of my favorite fresh water species.
They’ve been romping and chomping for 37 million years.
Incredible animals… Especially the one’s I’m able to calm, then I’m really able to appreciate up close. “Important legal disclaimer: If you come across a gator, don’t try doing this. You’ll lose a limb or something much worse. Call the Fish and Wildlife Commission of WorldStar.

Then Kevin Hart saw the picture and he replied:

So i guess we are done doing movies together…. I say this because if you’re doing stupid shit like this, you’re gonna die soon… Stop fucking with these wild animals man!!!!!. 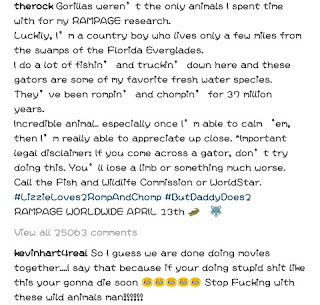 Very funny, but The Rock didn’t reply Kevin Hart on this one.