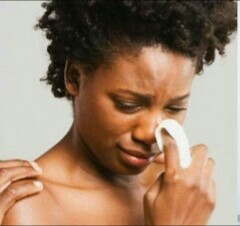 A young lady by the name miss cherry, come out to share her experience on how she was played and dumped by her boyfriend who even engaged her but still left her for a sugar mummy.
According to this lady, they’ve been dating for over four years and had plans to tie the knot before things started falling apart. The young man has absconded with his rich lover to an unknown destination.

Below are details of her experience

Hello everyone, I’m Cherry, and I want to share this experience with my fellow females out there who are in a relationship, we all have to be careful how we fall for cheap lies and cheap thrills. There was nothing in this world my fiancée never said to me when we were dating, but all of a sudden there was this sudden change in his behavior, and for the fact that he stopped loving me and left me for a woman old enough to be his mother, is even more painful and embarrassing.

His name is Fred. Me and Fred dated for 2years and these two years were the best years of my life because he was such a fun loving and caring person. All my friends were jealous of our relationship as most times weree been used as a reference point in other relationship. Fred never hid anything from me at all, he always involves me in anything he does. There was a time last year when he was posted to Abuja for
a one month training, Fred ask me to go with him because he wants everyone to know close we are and that he doesn’t want either of us to fall into temptation {LOL}.

He made me feel so special that I couldn’t even think of this happening even if a prophet told me it would happen.
Whenever he travelled to go and see his parents in Delta State, he would bring gifts from his mother to me, even if we are not together any more, Fred was a
very caring man and I miss him for that. Sometime last year, December to be precise, we both travelled to see his parent and they gave me a special welcome and his dad and mum told me everything Fred said of me to
them, and I felt so happy that one of the biggest and scary hurdles in relationship these days which is family acceptance, have been crossed. Everything was going fine and we got engaged on the 15th of January this year, and we had plans for the marriage in October. But I guess those are just mere wishes and fantasies right now because things have definitely fallen sideways.
It all started in February when he was posted by his company to Imo State for a one month training which they normally do when they want to embark in a new project. He was posted and we had plans to travel their together but my mum fell sick so I had to stay with her. Fred travelled alone and we talked through phone and video calling.

For three days, Fred didn’t call me and he wasn’t returning my calls, I tried reaching out to his company and they told me Fred always report to them everyday, I asked for the number he used in reporting to them and it was the same number I have been
calling. I was worried and I didn’t even think it was leading to this, I called his friends and they couldn’t understand what was going on, his close friend called Fred with his phone and he picked up, I ask him to allow me speak to him and he did, he was surprised from the tone in his voice and he said he’s been trying my line and it wasn’t going through, I knew it was a clumsy lie, and that was actually the first time he lied
to me in 2 years. He promise to call me back that day.

Later that day, I called him, and a lady picked the phone, she said Fred is in the bathroom, at this point I was really scared and confused, so I hung up. About 30
minutes later, he called and said he was sorry for everything that had happened. I ask about the lady and the bathroom and he said the lady is just a waiter,I believed him and he promised that none of that will
happen again. But after that day, I was the one doing the calling and the texting and he was just at the receiving end without replying to my text or even returning my calls.

At this point, I was already prepared for whatever would happen because I studied the signs and I knew it wasn’t a good
one. I got a text from him and he said he would like for us to meet that he has something to say to me. We met two days after he sent the text and I was surprised he now has a car and he never said anything
to me about it. There was a lady in that car that day, she was old, like fit enough to be Fred’s mum. He stepped out of the car and we went to an eatery very close to where he packed.

I already knew what he was about to say, so I wasn’t emotionally tortured at all. He told me it was the hardest decision for him to take and that he really wished there is something he could do.
He said he has his reasons and before he started explaining I walked out on him because I won’t just sit there and hear him
say he is leaving me for a older woman he met in one month. We’ve been dating for 2 years and I got dumped because of an old rich woman. It’s painful but I understood men better after my experience with Fred.

It was obvious he left me for money and I will never allow anyone treat as a second option. It was fun while it lasted and I really hope he finds peace dating his sugar mummy.

That was the experience of our guest this week and just a lesson for everyone to learn. You should not allow anybody treat you as an option or someone they could just flip sideways, give yourself a standard, like
Cherry, she wasn’t even bothered because she knew what was coming. We have to build our emotion and not allow them control us.

This is today real life story on MY EXPERIENCE.