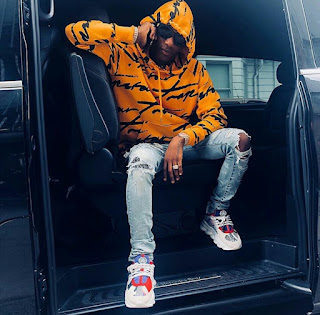 Not many top musicians in Africa have had a sold out show which they’ve organized  across the African border, but Nigeria’s very own Ayo Balogun, professionally known as Wizkid or preferably as he would liked to be call, Starboy is actually making Africa proud as he becomes one of the very few artist to sell out the London 02 arena for his music concert, AFRO REPUBLIK.

Wizkid puts the show together with the main aim of projecting African and Nigeria music to the world and to actually take our culture and values across the borders of the continent so that people can actually understand that Africa has a lot in store.

The music concert title which he named Afro Republik, is fairly related to the times of the great Fela, the Nigerian Afro Pop legend who Wizkid said was a great influence on him and his music. The ideas of the arts and design of the musical concert were not far fetched from the ones Fela did during his years on stage. 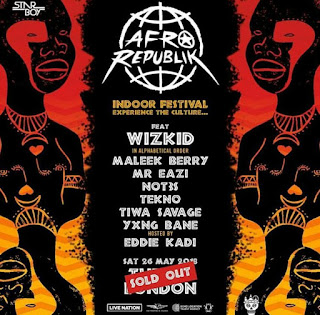 Afro is one of the music style that Fela innovated through his magical ideas and even after his death, his legacy still plays a key roles in the music industry today as the likes of Wizkid still refer to him as the greatest influence that changed and set a new pace for today’s music.
Afro Republik was put together by Wizkid as he continues to expands his horizon throughout the world. Wizkid won’t be performing on the show all by himself as he has invited six other musician from Nigeria to join  him celebrate the success of the Nigerian style.

Among the six musicians that were invited by Wizkid to perform alongside him in the show is Tiwa Savage.
The African Rihanna as she is fondly called by her fans, will be bringing on the heat as she performs for the first time in the London 02 arena. The “MALO” crooner will be widely expected by her fans to perform some of her hits songs as she cements her name as one of the greatest female artist in Africa and in Nigeria.

Apart from Tiwa Savage, Wizkid also invited MR Eazi to perform at the arena with him. Mr Eazi who is currently signed to Wizkid’s Starboy record label, has gained popularity in the music industry with his famous hit song “Legover”.

The song which Wizkid appeared surprisingly in the video. Mr Eazi is also familiar with the Ghanian people because he schooled their and so, a lot of his fans in Ghana will be in attendance at the 02 arena to watch their superstar perform.

Tekno was also invited to the concert to perform alongside Wizkid in London.
The “Diana” crooner wouldn’t have been left out of the show by Wizkid because he has been on fire lately in the music industry. He’s gone from writing his own songs to producing his own song and Tekno didn’t slack a bit. He produced Davido’s award winning song “Fall” and also produced his hit song “Pana”.

Tekno has been much on the rise since last year and he seems not to be slowing down a bit. Tekno did a song with Wizkid “Mama” last year. The song went viral as Tekno co-produced the song with other producers. The music bond between these two is energetic and the fans at the 02 Arena will feel the heat on stage.

The other three music artiste that will be headlining the show are Maleek Berry, Not3s and Yxng Bane.
Maleek Berry has taken a break from producing and he is establishing himself a bit more in the music industry. He’s released some hit song like “For my mind”, and the song really gave him audience with a lot of people admitting that they never knew he was that good in music but he seems Maleek just
wanted to take everyone by surprise.

The Afro Republik indoor music festival will be hosted by Eddie Kadi and it will be held in the famous London 02 Arena on the 26th of May 2018 which is apparently two days from today.