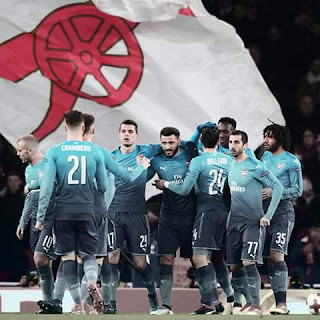 Real Madrid welcomed arch rivals Athletico Madrid to the Santiago Bernabeu in their Sunday fixture in the league.
Cristiano Ronaldo and Gareth Bale led the front line for Zinedane Zidane’s men on Sunday, while Antoine Greizmann led the attack for Athletico Madrid.

The first half ended in a goal less draw. But in the second half Ronaldo broke the deadlock as he scored the first goal in the game after a fine assist from Gareth Bale. Few minutes later Griezmann equalized and it ended 1-1 at full time.

The draw saw Real Madrid fall back to the fourth position as Athletico Madrid remained in the second position.

In the premier league, Chelsea drew 1-1 with West Ham in Stanford bridge.
Chelsea defender, Azpilicueta opened the score sheet for Chelsea in the first half which happened to be Chelsea’s first goal of the game. In the second half, former Manchester united striker,  Chicharito, came from the bench as he equalized to earn the Londoners a point in full time.

Arsenal scored three as  they beat Southampton 3-2 in full time. Two goals from Danny Welbeck and one from summer signing Pierre-Emeric-Aubameyang, gave the London side the three points.