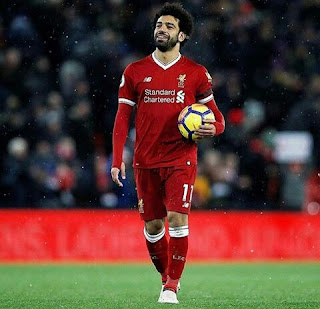 Against all odds, against impossibility, Liverpool defiled all as they beat Manchester City 3-0 at Anfield in the first leg of their Uefa champions league fixture.

Three goals in 30 minutes was more than enough to secure their first leg triumph over league rivals, Manchester city.

Just 12minutes into the game, Liverpool’s danger man, Mohammed Salah opened the score sheet for the home team as a short pass assist by Firmino finds Salah who hit the back of the net to put the home team in the driving seat.

Manchester city continue pressing high and mounting pressure on Liverpool, but they were caught off guard as James Milner long pass finds Oxlade-Chamberlain who drilled a long range shot from outside the 18 yard box to make it two in the 21st minute.

Manchester city had more possession of the ball but that count to nothing as a nice chip from Salah finds Mane in the 18 yard box who nods it past Ederson to make it 3-0 in the 31st minute.

The second 45 minutes was a walk in the park as Liverpool made sure they keep a clean sheet against their rivals.

Injury concern for Liverpool as Mohammed Salah was withdrawn and replaced by Wijnaldum in the 52nd minute.

It didn’t seem to be a serious injury as no stretcher was required to aid him from the field.

This result was definitely not in Pep Guardiola’s plan. Liverpool is the only side that have beaten this City side in the Epl this season. Though Man. City battered them 5-0 in the return fixture.

They will be looking to repeat that sublime performance when Liverpool travels back to the ethihad stadium for the return leg.