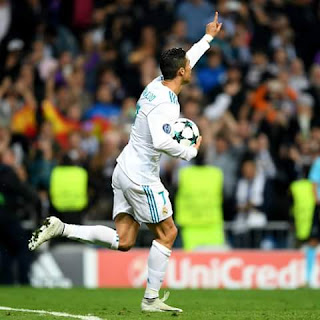 It was raining fire and brimstone in the Uefa champions league fixture on Tuesday night between Real Madrid and Juventus.

Alot was said about the fixture after the draw few weeks ago with Madrid having the  overall advantage over the Italian giants.

But history repeated itself as Real Madrid battered Juventus 3-0 away from home in the much anticipated fixture.

Just three minutes into the game,Isco with an amazing assist finds Ronaldo who finds the back of the net as Madrid continue their impressive run in the Uefa champions league this season.

The Spanish giants dominated the whole 90 minutes as Juventus were struggling to find their foot in the game.

The second half was more heated as Madrid continued their dominance.

In the 64th minute, a cross from Carvajal finds Ronaldo in the 18 yard box who scored an absolute banger with a bicycle kick. Buffon could only stare as the shot was nowhere near his reach.

Adding salt to the injured Juventus, Paulo Dybala was sent off with a second yellow card in the 66th minute to bury all hope of a dramatic come back for the old lady.

In the 72nd minute, Ronaldo with a sublime assist to Marcelo put the game beyond reach for the Italian giant as it ended 3-0 at full time.

Ronaldo was the man of the match as he scored two and assisted one.

Real Madrid are going invincible as it stands and the second leg will be a walk in the park.

With you two goals, Ronaldo remain in the driving seat of the highest goal scorer in the champions league this season.

All hope for Juventus to secure the Uefa champions league silverware this season is on the fence as they’ll focus all attention on the Serie A.

Madrid heads back to Spain with a three away goal advantage.