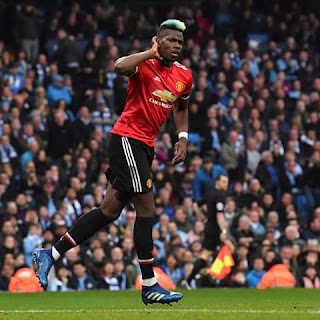 Manchester was red on Saturday as the two Manchester’s clashed in a much anticipated fixture. The fierce rivalry between two coaches and two clubs, locked horns in their league encounter.

Manchester City needed a win to be crowned champions but Manchester United had other plans. It was a dramatic 90 minute as the red devils came from 2 goals as they defeated the shark team 3-2 at the end of full time.

Two goals form Paul Pogba and Chris Smalling, completed the come back for Jose Mourinho’s men.
It all looked like the title race ended in the first half as Manchester City scored two in the first 45 minute of the game.

Vincent Kompany scored the first goal for City as he nods home with a beautiful cross from Sane in the 25th minute.
Raheem Sterling assisted Gundogan with the second in the 30th minute.

It looked done and dusted as the first half came to an end. The fireworks began in the second half as Pogba scored two within 2 minutes with assists from Herrera and Sanchez to make it 2-2.
Chris Smalling completed the come back for the devils in the 69th minutes with a nice pass from Sanchez.

The lost mean Manchester City will have to run their next league game before they’ll be crowned champions of England.

They’ll square up at home against Liverpool for the second leg of their UCL tie, with Liverpool firmly on the driving seat.