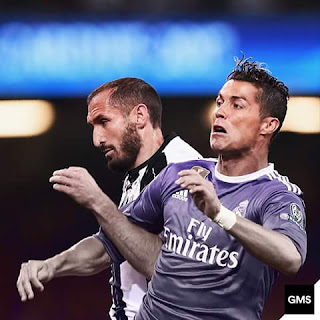 Italy and Juventus defender, Giorgio Chiellini, has made a big claim as to who is the greatest footballer of all time.

Juventus were battered 3-0 by Real Madrid in the first leg of the quarter final encounter in Turin.

Cristiano Ronaldo scored two including a bicycle kick and provided an assist to Marcelo to make it 3-0 in full time.

The Juventus defence were overwhelmed by a very sharp attacking Madrid and Chiellini has bowed to the supremacy of Ronaldo, labeling him as the best player in history.

“I’ve never heard fans in Turin applaud an opposition player before. In my opinion he’s the best player in history”.

Who can blame the fans for applauding, it was a super performance by the Real Madrid side on Tuesday night.

Paulo Dybala was sent off for a second offence in the 65th minute and Madrid capitalized on that as Marcelo pulled one in for the Spanish side.

With the unending debate on who’s the greatest footballer of all time between Messi and Ronaldo, Chiellini has made a choice, what about you, do you agree?