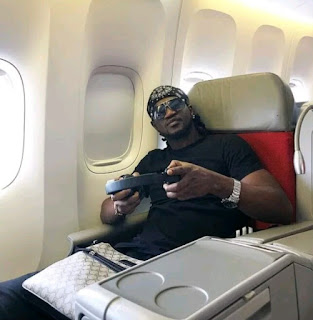 These online beggars have even taken the begging profession to pages on Facebook where they’ll come up with needs that will move you to want to give to them whether they’re lying or not.

These beggars come up with begging strategies like they’ve not eaten since morning, they need money for school fees and some even claim to be nursing their baby.

Paul Okoye of the defunct Psquare group, shared his experience with an online beggar who asked him for alms this morning.
According to Paul, the online beggar has been on his nerves, throwing shades on him and insulting him in every chance he gets, both on Instagram and twitter. He was surprised that his enemy is now asking him for money to pay his school fees.

Paul ridiculed the beggar on his Instagram account as he revealed how the online beggar started asking him for money and he caption the post ” This is not karma, Na karma senior brother “. 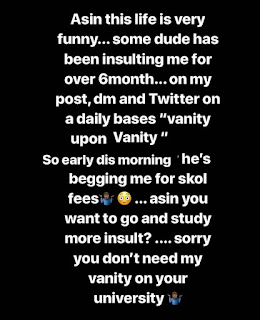 Paul is not the only celebrity who called out these online beggars, Nollywood actress, Mercy Johnson, was recently taunted by an online beggar who claimed to be a mother and that she is having a hard time training her child. The beggar called out the actress on her Instagram post by angrily asking her ” you nor dey dash person money?”. This then made the actress  pay a deaf ear to her situation, if it ever occurred.