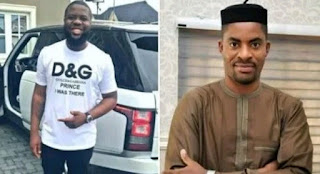 Former PDP director of News and Media, Deji Adeyanju has called on the Economic Financial Crime Commission to investigate the source of wealth of Nigerian big boy, Hushpuppi. Deji made the suggestion after the EFCC raid a night club in Lagos that led to the arrest of 15 suspected internet fraudsters popularly known as ”Yahoo Boys”.

The rate and popularity of these online scammers have given the country a made name and it’s been ranked as one the the country with the highest number of internet fraudsters.

Following the extravagant spending of Hushpuppi without publicly declaring his source of income is what prompted Deji to ask the EFCC to investigate him.

I want to specially congratulate the EFCC this good job. They need to put in more effort to arrest these internet fraudsters. There are more of them in Abuja. And there’s this so called Hushpuppi or something like that.

When we go to clubs, we see the way these young boys spend money. They watch their feet with drinks that cost millions of naira and pour them on wristwatches. No one who works hard for their money will do such things, not even Dangote. The EFCC have done very well and I commend them
for that.

Nobody said they are internet fraudsters but they all ran and abandoned their cars when they saw the EFCC which means they have a lot to hide. The wicked runs when nobody pursues but the righteous are as
bold as a lion.

These Yahoo Boys are made up of people who have no value for money, they spend it as if they plucked it from a tree or something. When someone make 1billion naira out of hard work, you will know and when someone stole 100 million naira, you will know because of their behavior and
how the money is been spent.

The EFCC should continue in their raiding and bring these thieves to Kirikiri prison. I support this line of action. I’ll suggest they go to clubs like Quilox, Cubana and all other big night clubs and arrest them all.
The guilty ones will always run if EFCC comes because they are not legit, unlike me with a legit business, they will even greet me when they come.

I also heard some people were criticizing the EFCC on what they did. How can people so clueless and embrace these thieves as people worth celebrating. They are cluless.

Deji Adeyanju and his #OurMumuDondo movement, held a protest yesterday to bring back former minister of finance, Diezani to face corruption charges in the
country.

Speaking on the protest, the convener of Concerned Nigerians Civil Society group, said that ‘Any Nigerian that lives a flamboyant lifestyle and cannot account for his money should be arrested by the EFCC.