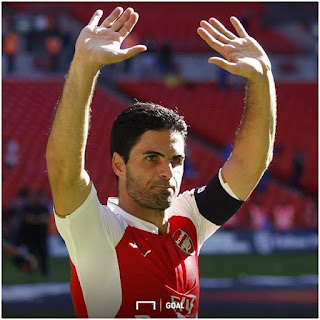 Former Arsenal Midfielder, Mikel Arteta, have agree to become the New Arsenal coach.
The former midfielder will be announced as the new coach in the coming days. Mikel Arteta has agreed in principle to take over from his former coach Arsene Wenger at the end of the season.

At the moment no contract has been signed by both parties, the announcement of Arteta’s return will be made in the coming days.

The former midfielder’s return comes in the aftermath of a cull of backroom staff, with the former Everton man playing a major role in the recent staff overhaul in the club.
Arteta is the current assistant coach to Pep Guardiola at Manchester City and he played a huge role in guiding the Shark Team to their success as the premier league champions this season.

Arteta is highly rated by Arsenal’s chief executive Ivan Gazidis, who is in the opinion that a younger coach will slot into a modern European football structure. Also complementing the idea is head of recruitment Sven Mislintat and new head of football relations Raul Sanllehi.

Although he’s not been appointed yet, Arteta has already been the cause of  backroom staff overhaul as long serving head of medical services Colin Lewin told that he will be sacked after 23 years at the club.

Sources close to the team reported that Arteta made the recommendation for Colin to leave the club before his arrival as the new head coach because while he was yet to fully recover from an injury, Lewin rushed him back while he was still the captain of the club.
A number of players were very sad and disappointed by the decision to let Colin Lewin leave the club, with Neil Banfield, goalkeeping coach Gerry Peyton, fitness coach Tony Colbert and kit man Paul Johnson also leaving the club after years of service.

With the dismissal of these long servers at the club, Arteta is expected to arrive the Emirate with his own backroom staff.