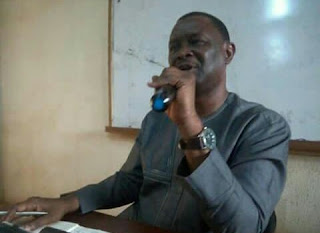 Actor, Producer, dramatist, director and ace founder of Mount Zion Faith Ministry, Mike Bamiloye, express his displeasure on gospel instrumentalist around the world for what he described as a universal behavior by these instrumentalist who interrupts and don’t pay attention to the word that are been preached on the altar.

He pointed out so many bad universal habits by these instrumentalists one of which is that they’ll never answer to an altar call and that when message’s of great importance are been preached, they won’t listen.

Something baffles me,
The Church Instrumentalists.
These Young Men and Boys that entertain us with the Musical instruments in Church.

I come Across them everywhere I have gone.
As if their Attitudes and behavior have been Universally and unanimously Agreed upon.
You will be on the altar Preaching, They will be
Fiddling with Guitar Strings.
You will be Teaching the undiluted word from the throne of God, many of them will be Sleeping or browsing or will not even be in the church that moment.

Messages of great spiritual importance will be blaring out to the Congregation,
They will be using their Keyboard to Confirm what the Preachers are saying.

When the atmosphere is filled with the holy spirit and everyone is in sober reflections on the vital message, they will be playing Nollywood and secular music.

AND WHEN AN ALTAR CALL IS MADE AND PEOPLE ARE COMING OUT FOR SALVATION AND REDEDICATION OF THEIR SOULS,
THEY WILL BEGIN TO PLAY TONES OF ENCOURAGEMENT LIKE
“I SURRENDER ALL..”
TO ENCOURAGE PEOPLE TO THE ALTAR.
BUT THEY WON’T COME OUT FOR THEIR OWN SALVATION OR IT’S LIKE THEY DON’T SEE REASON FOR THEM
TO REDEDICATE THEIR LIVES TO JESUS.
AND THEY HARDLY COME OUT FOR ALTAR CALLS.
I am Sorry, Maybe it is Only me that have this observation— Mike Bamiloye.

The man of God has said it all and we all can agree that indeed it is a universal habit by these guys, so if you’re guilty of these he has mentioned, repent now!.