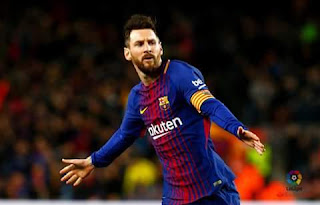 FC Barcelona moved a step closer in their race for the League title as three goals from the Argentine magician, Lionel Messi, saw them cruise past Leganes 3-1 in full time.

DEMBELE AND COUTINHO STARTS.
Both new signings were included in the line up, and they both provided an assist in the game. Coutinho played the whole 90 minute but Dembele was substituted for Denis Suarez in the 87th minute, shortly after assisting Messi for his third in the night.

VALVERDE’S TEAM ROTATION.
In a pre-match interview, the coach express his intention to rotate the team in order to give rest to some key players. The rotation was seen in the lineup as Andres Iniesta started from the bench, Rakitic, Paulinho and Umtiti were unused substitute as the likes of Andre Gomes and Nelson Semedo were given more minutes.

MESSI’S HATRICK.
The Argentine magician extends his goal tally to 29 goals in the league as he sits comfortably at the league’s top scorer’s position with Luis Suarez and Ronaldo occupying the 2nd and 3rd position.
Messi scored his first in the game with a superb free kick making it his 6th goal from free kick this season, equalling Ronaldinho’s record for most goals scored with free kicks in a season.

The magician lashes home another wonderful goal with an assist from Coutino in the 32nd minute.
He bagged the hat trick with a pass from Ousmane Dembele in the 87th minutes.

WHAT’S NEXT.
The team will play the return leg of their champions league fixture against AS Roma in Italy on Tuesday night after a 4-1 victory in Camp Nou in the first leg.

38 GAMES UNBEATEN.
Enrique Valverde’s   continued their progress in league as they made history last night as the second team in the league’s history to play 38 games without losing one. The only team that reached this level of 38 games unbeaten in the league was Real Sociedad back then in the 80’s. This is velvede first season with the club and unlike previous coaches, he has conceded fewer goals this season.