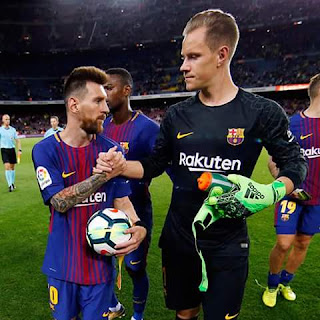 Lionel Messi came off the bench on to score an amazing goal in Saturdays encounter against an in form Seville.

Seville looked indomitable all through the game as the scored two goals in each half of the game.

An unorganized Barcelona were almost at the verge of losing for the first time this season in La Liga but it was the magic of Messi that bailed the Catalonian’s out.

Messi was on the bench due to an overload in his muscle which kept him out of the international friendlies against Italy and Spain.

He came on as a sub in the game against Seville to score a long range after a beautiful pass by Coutinho found Messi  a few yard away from the 18 yard box.

Suarez pulled one back to make it 2-1 before that audacious goal by Messi made sure that the Spanish giants continue in their superb start to the season.

With the 2-2 score line at full time,  Barcelona sits comfortably at the number one spot with Athletico Madrid and Real Madrid occupying the second and third position.

Barcelona are few games away from securing the league title as they’ve been without a doubt the best side in the league this season.

Goals from Gareth Bale and Benzema whi captained the Los Blancos for the first time, ensured their victory.

With the win, they remain in the third position with Diego Simone’s side in the second position.