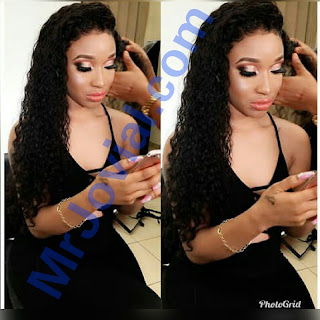 Popular award winning Nollywood actress, Tonto Dike took to her instagram page to reply rumors about the relationship between her son, King Andre and his supposed grandfather, former president of Nigeria Olusegun Obasanjo.

This was after a blogging site posted a picture on their Instagram account “Celebritys_Kid” of Tonto Dikeh’s son, King Andre, sitting on Obasanjo’s lap while his father Olakunle Churchill watched happily on their page.

The actress called out the page for publicizing fake news and also lying with her son’s image, She wrote;
“I beg your pardon, that’s my son, Andre and the former president is not his grandfather in any biological way. Baba is a great men and has been wonderful to me and my son , but for the sake clarity, we have no blood relationship with Baba.”

“But Its very unprofessional and barbaric of you using my sons image for a Lie.. He has 2 grand fathers, One is dead and My father is very much alive and healthy.. I was as ignorant and in darkness like you now until I found the truth. so pls pls and pls I’m pleading with whoever is behind this and pls again as a mother I wouldn’t tolerate this lies about who my son’s grandfather is”

After squashing the rumors on air.. Some followers criticized her manners and dragged her to filth.. They claim there were matured and better ways she could have corrected the notion. 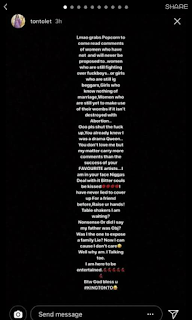 But the actress is disagreeing… In a new post she replied:

Ooo please shut the f**k up, you already knew before now that I’m a drama queen. You don’t love me but whatever concerns me carry more comments that the success of your favourite artists. I am in your face NIggas Deal with it Bitter souls be kissed. I have never lied to cover up for a friend before. Raise your hands! Table shakers I am waiting?

She continued her harsh replies:

Nonsense or did I say the former president was my father? Was I the one to expose a family Lie? Now I can because I don’t care. Well why am I even stressing my self too.. I am here to be entertained. Btw, God Bless u #KINGTONTO.

A follower then replied her comments:
“Even women who are yet to make use of their womb”… so deep and uncalled for, too far, Hmm. U have easily forgotten there’s something called death.. Don’t be so sure and comfortable with life. It turns around.. *Grabs popcord @tontolet..

..and then Tonto’s comment was rather too harsh and we uncalled for.. and shocking.. Tonto wrote;

“May the thing called death visit you and your unborn generations,Amin.

She also had something to say to those people judging her that as a Christian that she claim she is, she shouldn’t utter such disastrous statements, 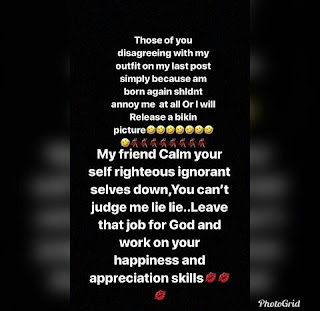