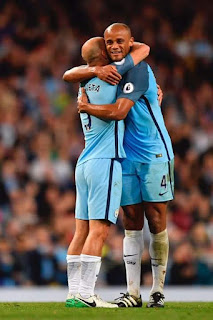 Who can stop this Manchester City side this season?

Manchester City are just one win away from been crown the champions of England.

The invisible as they’re now called, are cruising and crushing any team in their way.

They defeated Everton 3-1 on Saturday with goals from Leroy Sane, Raheem Sterling and Gabriel Jesus secured Pep Guardiola’s men with yet another league victory.

Guardiola’s men have only lost once this season and that lost was against Liverpool at Anfield as it ended 4-3 to deny them of been totally invincible this season.

This City side have beaten all the top teams in the Epl this season and if they can beat Manchester United in their next league feature, they will be crowned the champions of England.

Manchester united who were dumped out of the Uefa champions league by Sevilla, will be looking to slow down the party for the shark team.

They’ve secured their first silverware already in the Carabo cup as they crushed Arsenal 3-0 in the final.

Next opponent in the league for them is Manchester united, but before then, City will face the only team that have defeated them this season in the Epl.

They’ll lock horns with Liverpool at  Anfield in the first leg of the Uefa champions league.

Guardiola described the fixture as a tough one for both teams who are hoping to secure a semifinal spot.

Liverpool’s Salah have been breaking records this season with Liverpool. He is currently the league’s highest goal scorer but Manchester City will want to put that lost beyond them as they face off on Wednesday night.