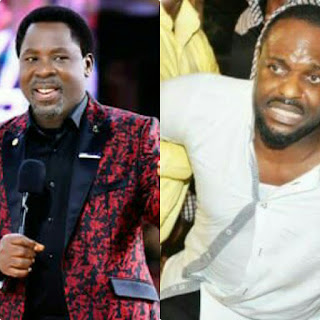 Nollywood rude boy, Jim Iyke, couldn’t hold for long his beef with Prophet TB Joshua and has finally opened up on what really transpired in 2013 when he was been delivered by Prophet TB Joshua, the founder of Synagogue Church of all Nations church.

A quick flashback on the viral video of when he was her delivered as the actor rolled uncontrollably on the floor which led many people alleging that the actor was possessed with a demonic spirit and had to be delivered. 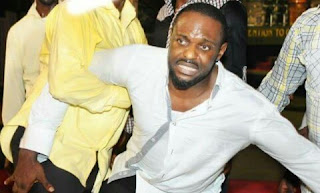 In an interview with Channels TV, the actor revealed that TB Joshua took advantage of him, although he wasn’t paid to act like he was possessed.

He revealed further that his coming to Synagogue was not his own will and decision stating that he was forced.

“My mum was very sick and to be honest with you, at that point if they told me that there will be a cure in hell for her sicknesses, i’ll go.

We’re talking about my sick here mother you know? so i went to the church. I remember i was accompanied by my security, my sister and my Personal Assistant.

When we got to synagogue church of all nation, there was constant insistence, we were in a room upstairs  so there was constant insistence that i attend the church service that day. That wasn’t anywhere near our initial arrangement, the understanding is that come to church and worship, ‘because we brought my mum, she was sick, so we kept her in a hospital near by. So the understanding is that you lay your hands on her and she’ll get healed, but they insisted and said no you must come to church. My sister wouldn’t let me be as she forced me till i was left with no option than to attend the service downstairs.

“I was there in the service, and when the whole thing about touching people and they’ll start saying stuff beyond human imagination was happening, i found it a bit funny, seriously. I’m having this discussion with you on National TV, everyone is aware and i remember my sister pinching me and telling me to stop. And i said this is charades, this is not the reason why we’re here, I suggested we take my mum from there and move her somewhere else we could find medical help.

Then we were about leaving for South Africa, to this gentleman that was recommended to us, a specialist as well. Before i knew, the gentleman in question walked passed and i looked at him and still had the same look of amusement on my face, and he touched me.

” To be sincere, i really can’t explain what happened within that space of time. Within that few minutes where whatever this whole thing happened. I’m not here to start answering questions to spiritual things that is way beyond me. Like everyone else, I’m a man that understands how a lot of things work. That i cannot explain, and nobody can suggest anything otherwise ‘because personally i know what happened to me. But within that time lacks explanation. They said i said stuff, i did stuff.. i was fooling around, of course I couldn’t control myself, but i find that extremely embarrassing at that time”.

The actor also spoke on his fight with Olisa Adibua and how he reached out to him and he refused to allow things slide.