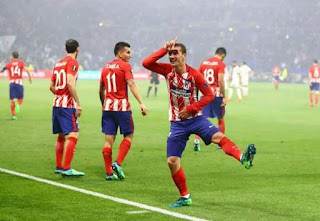 Athletico Madrid secured their first silverware of the season as they battered Olympique Marseille  3-0, in the final of the UEFA EUROPA LEAGUE, played In Lyon, France.
The Spanish side were by far the better side as they out played their opponent in every aspect of the game.

Olympique Marseille blew the only chance for them to win a trophy this season as all their efforts to come back into the game was made futile by the ever formidable Athletico Madrid’s defence.

Antoine Griezmann Was The man of the match. The striker scored two beautiful goals in today’s final.

Diego Simone’s men proved to be a very hard nut to crack as they were actually uncrackable by the French side all through out the game.

Olympique Marseille conceded their first in the game in the 21st minute. Antoine Griezmann converted a beautiful pass from Gabi, as he slots it beyond the reach of the goal keeper to make it 1-0.

The Spanish side continued putting pressure on the French side, as the punched away a breath taking shot by  Gabi. Dimitri Payet also saw his shot going off the bar as they try to force in an equaliser.

Everything wasn’t going well for Marseille as their star player, Dimitri Payet was forced out of the game in the 32nd minute due to injury. He was replaced by Lopez.
The first half ended with the Spanish side going into the tunnel with a one goal lead.

The second half began and just four minutes of play, Griezmann extended the lead with a nice assist from Koke. Things were definitely going from bad to worst for the French side as they continue to seek desperately for the chance of an equaliser.

The Marseille side pressed forward but the formidable defence of Athletico Madrid side, wasn’t going to give room for the French team.

In the 89th minute, the Spanish side scored their third of the game. Gabi was right in time as he converts a cool assist from Koke, to make it three and that goal added more salt to the injury of the French side.

Former Liverpool, Chelsea and AC Milan striker, Fernando Torres’s, was subbed in on the 90th minute, the striker came in for Antoine Griezmann.

It ended 3-0 and the French side failed to score in the final.