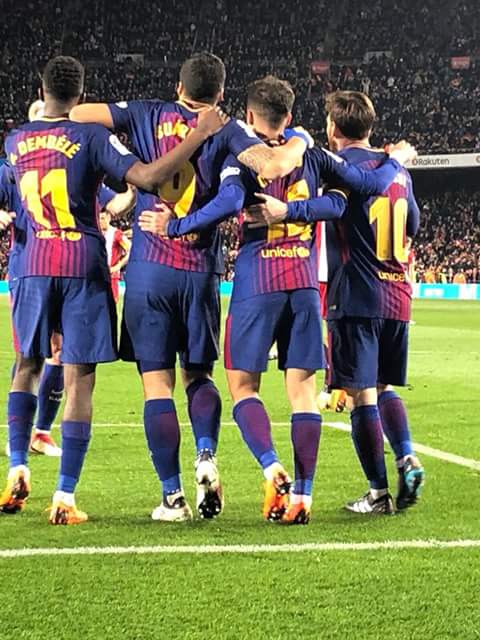 Fc Barcelona took a step closer to the semi final spot in the Uefa champions league on Wednesday night as they pulled four goals pass AS Roma in the Camp Nou.

The Spanish giant took the home advantage as a weak Roma side failed to live up to the standard of the game.

Two own goals from the Italian side and two goals from Luiz Suarez and Pique was enough to put the game beyond Roma’s reach.

Edin Dzeko made sure Barcelona didn’t keep a clean sheet as he scored the only goal for Roma in yesterday’s encounter.

Roma defender, Del Rossi intercepted a short pass from Iniesta which was intended for Messi as he turned the ball into his own net.

It ended 1-0 in the first half but the second half rained more goals starting from the 55th minutes as Roma’s Manolas turned the ball into his own net, making it two own goals scored by the Italian giant.

In the 59th minute, Gerrad Pique got his name on the score sheet after a very long wait.

Edin Dzeko pulled one back for his side in the 80th minute with an assist from perotti.

Luis Suarez extended the lead in the 87th minutes as the game draw to an end.

Everything went wrong for Roma last night as uncontrollable mistakes added to their misery last night.

FC Barcelona heads into the second leg fixture with a comfortable 4-1 advantage.

Following Juventus loss to Real Madrid, both Italian chances of securing a semifinal spot, is on the line.