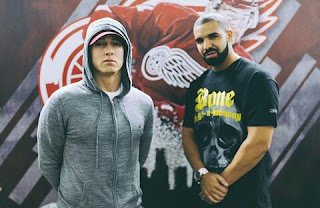 Canadian rapper, Aubrey Drake Graham secured the fifth position alongside fellow rapper Eminem in The Forbes five club of hip-hop’s wealthiest artist  on Monday with a net worth of 100 million dollars, according to Forbes.

50 cent lost his position to both rappers due to mismanagement of funds which led to bankruptcy last year. Drake increased his Networth through tours, music releases, music features and business deals with Nike, Sprite and Apple.

Drake sold 630,000 copies of his fourth studio album on, titled “views” on the first day of it’s release, according to Vibe Magazine.

With each album selling at 13.99 dollars exclusively on iTunes, the 30-year-old Canadian rapper made an estimated 800,000 on the night of the release.

While his networth was small in comparison to his fellow rappers and business mogul, The Canadian rapper was quickly climbing the ranks, earning him 250 million dollars to date excluding taxes and spending, Forbes said.

Drake and Eminen tied the at an even $100 million apiece. Eminem isn’t popularly known as a businessman like the other big names in the list, but he still holds the position as the best selling rapper of all time
and have sold more albums in the U.S during the 2000s, more than any other rapper in the genre.
Eminem who dropped a new album titled ‘Revival’ made his first entry to the No.5 spot as fellow rapper, Birdman slips below the $100 million mark due to liquidity issues.

The race for who will be the first hip-hop star to reach the billion-dollar mark is very tight between the two contenders in the No.1 and 2 position respectively.

Forbes analyzes artistes past earnings, values ,their current holdings and talks to industry specialists to determine which hip-hop star makes it on the list.