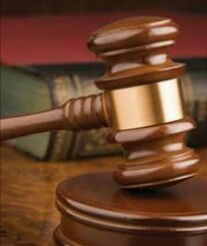 A married man was dragged to court by his wife because she caught him sexually abusing their 11-years old housemaid.

Esther, a well established business woman who owns a eatery in Kogi State,  reported the case to the state police concerning the sexual abuse against her husband before the matter was taken to court.

While in the court, the lady laid the complaint against her husband.

Esther: I heard of the sexual abuse on my housemaid from my neighbor who the housemaid confided in because she was afraid that if she told me, I will not believe her because of the trust i have for my husband. My neighbor who is the closest to me in the yard, told me everything  the maid told her against my husband and how he has been abusing her for over a month. I find it very difficult to comprehend because i can’t recall the last time i denied him of sex. So i booked an appointment with the doctor and I took my maid and my neighbor along with me. After the medical check ups, the doctor confirmed to me that, indeed my husband is guilty.

I left my maid in the care of the doctor for people treatment and i drove back home to confront my husband concerning the whole saga.

I confronted him concerning the whole issue, and without any atom of fear or remorse, he told me the maid is of age for sexual inter course though he didn’t have any with her, that he was only trying to teach her on the essence of true relationship values. I was very angry, i broke down in tears and i really don’t know how to feel about everything. I contacted our families and I’ve told them about the issue on ground and for me this is the end of the road.

Her husband Peter was asked to confirm if the allegations laid against him were true.

Peter: Just like i told my wife, i have nothing else to add. I didn’t have sexual affairs with an 11 year old, i confided in my wife concerning the truth and I thought she believed me, I’m very surprised she brought me here to tarnish my reputation, I didn’t do it and that’s the truth.

Peter further pleaded with the court to save his marriage and that he is not interested in a divorce.

The case was adjourned to be reviewed on the 30th of April, 2018 so the maid and the neighbor will come and give the court more fact on the case before the offender will be judged accordingly.

Mr Peter will remain on house arrest until that time.