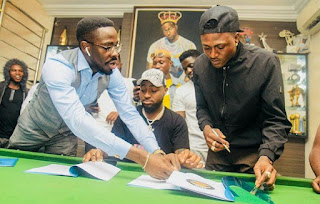 Davido has signed another artiste today to his record label, “Davido Music World”.  The talented superstar broke the news on his Instagram handle in the late hours of yesterday.
The newly signed artiste goes by the name “Idowest” is the latest artist to be signed into the record label.

Not a lot can be said of the artiste just yet but we can be rest assured that to be on Davido’s team, one has to be musically talented. Davido without any doubt, has a high taste for music and he has been doing great music lately and apart from him, other members of his label have also been topping the chart in the Nigerian music industry.

His most successful artiste is the “Mama” crooner, Mayorkun. Mayorkun has impress in the eyes of many since he was signed to Davido’s label in 2014.

The artiste won the award for the “Next Rated” artiste at The Headies award two weeks ago. He performed alongside Wizkid in Wizkid’s music concert last year December.

Mayorkun have been successful since he was discovered by Davido and has made a lot of progress in his music career since he came on the spot light four years ago and every other artiste signed under Davido’s label will be looking forward to emulate him.

Davido however, have been on the news lately as he performed in an overflow concert in Suriname, South America. Davido expressed his happiness and that he was shocked and surprised that the people there knows his music as they sang it word for word. Communicating through his Instagram handle, Davido explained that when he got the invitation from the organizers to come and perform in Suriname, he wondered if the people there knew him and that he was scared because he thought none of them would understand his music but to his greatest surprise they sang his song word for word and didn’t even give him the chance to sing.

He admitted that it was an emotional night for him and that he is still in shock. He thanked the people of Suriname for their hospitality.

In celebration of his fame, he signed this new artiste to his record label.
Davido now have more artiste signed under him than any other artist who owned a record label in Nigeria.
The likes of Mayorkun, Perruzi, Dammy Krane, Efe, Djecool and the latest signee Idowest are all signed to Davido’s record label.

Davido said in an interview last year that he hope to bring in more upcoming artiste in the coming years because he appreciates talent and he wants to see young artiste coming into the music industry to proved their worth. He also said that he if at any point an artist feels it’s time to move on and start things his their own, he’ll allow him.

Davido was on the news last month as he surprised his girlfriend “Chioma” with a 45 million naira Porsche on her birthday.

Davido also did a song titled “Assurance” which he dedicated to her. He released the video of the song on the day of her birthday and the video got a staggering “Three Million Views” the first day it was released.
Davido have told his fans not to sleep on him as he will release his album in the coming months.