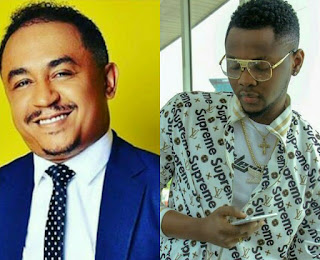 Popular and currently most controversial Nigerian On-Air Personality, Daddy Freeze, has criticized popular Nigerian musician, Kiss Daniel, for wearing a fake Louis Vuitton shirt.
In an instagram post, Daddy Freeze said he is not happy with Kiss Daniel for buying a fake designer dress and living a fake life.

Despite been one of Kiss Daniel’s fan didn’t stop him from calling out the artiste for patronizing fake products.

He said Kiss Daniel won’t be happy if some pirates try to short-change him by selling fake and unauthorized copies of his album.

He further advised him not to patronize fake cloths again and even insisted that wearing fake items is a crime and that offenders can be arrested for it.

I’m a big fan of Kiss Daniel music and i appreciate everything he’s done in the music industry @iamkissdaniel.

My family love his music and his personality and everything about him is just cool, I do believe this won’t happen again.
–
I’m sure he won’t be happy if people pirate his intellectual property leading to revenue loss and financial breakdown for him, the same applies to LV.
–
Wearing fake products is actually a crime against the company producing the original producyt. ~FRZ 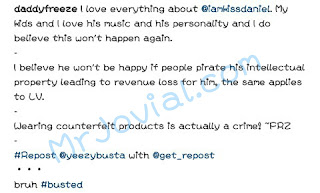 Daddy Freeze had earlier blast Nigerian celebrities who patronize fake products  and counterfeit designer wears. In his post, which served as a response to one of his followers on instagram who had spotted fake watches on Nigerian singer Terry G.

Freeze said:
”Thanks @feeljeni, tell them!
Guys, ACT YOUR WAGE!!!
Don’t live a fake life because you want to impress your fans, live within your wage!!

If you can’t afford an original Rolex, Patek or Audemars, buy Seiko, Citizen, Timex or Swatch!, they’re all watches with good quality too.

I have never seen a greater patronage on fake watches anywhere on the globe, than in the Nigerian entertainment industry.

Gospel musicians, upcoming pastors, OAPs etc aren’t left out of this fraudulent act.
You’ll hear stuff like“My Rolex is original, I bought it for N350k”. This only serve to showcase the ignorance of many entertainers in the industry.
There is NO ROLEX, AUDEMARS, PATEK, RICHARD MILLE OR VACHERON for N350k! ITS FAKE AS HELL! The cheapest Rolex ranges from about $5-6k do the math! Even the fairly used will still set u back circa $2k for a deadbeat and practically mutilated piece. So a brand new luxury watch for N350k is fake o!.

At least 90% of the watches in the industry are fake and counterfeit!!

Now, it’s not just about using the company’s goodwill to produce fake goods, when you try to act like you are bigger than your true worth, it’s a proper crime that can place you time behind bars for years!

But most of those in the entertainment industry  are sadly fake and unapologetic.

If you want to buy @Rolex or @Cartier or Piaget buy from @pololimited and if you want @richardmilleofficial or @audemarspiguet buy from ???
So please, throw those bescumbered Folexes, Pafakes and Fraudemars into the bin before you get arrested for your ignorance, and then the fake money you show off on social media’s won’t post your bail! ~FRZ”