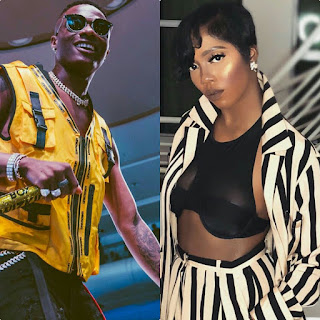 There have been rumors and speculation sparking reactions on social media that   Wizkid and Tiwa Savage are in a relationship.
Both superstars have been seen on different
shows together as they hug tight in loved up
pictures.
Tiwa Savage, a mother of one, was
engaged with music producer, Teebliz, and they
have a son together. Things didn’t worked out fine as Tiwa Savage accused Teebliz of infidelity and also finding in his possession, dangerous
drugs like cocaine and other harmful drugs. From then on things started cracking up for the couple.
They couldn’t seem to find a common ground to make things work.

Though Teebliz promised to change from his
old ways and remain faithful to the love of his
life, Tiwa clearly wasn’t having none of that as she filed
for divorce and possession of their son, Jamal.

Since then, Tiwa Savage has been a single
parent and she definitely will want to move on
to another relationship.
she has been spotted several times this year in
several shows she performed with Wizkid, hugging
tight to him and recently she also called him “my lord”
in a show last month. These recent love moves
by both super stars has fuelled the rumors that
they might be dating secretly.
Wizkid however added more fuel to the fire
when he posted on his Instagram handle that
“a woman deserves to be loved”. This post
sparked a lot of reactions on social media as
many people believed  he was referring to
Tiwa Savage.
Though Wizkid have three sons from different
women, it doesn’t stop him from mingling with
Tiwa Savage.
Some celebrities are also having their opinion
on this matter and the latest to say something
about the rumors is Mr Assurance, Davido.

In a
recent post on Twitter where Wizkid posted
that he needs a sister, Davido quickly replied
Wizkid’s post and said “Tiwa our sister”. Though Wizkid
didn’t replied Davido’s post but Tiwa Savage
didn’t find it funny as they both Unfollowed each other on Instagram.

Though both Tiwa and Wizkid haven’t come out
yet to say anything concerning the rumors, the
signs are there for us to see and sooner or later
the truth will be revealed.