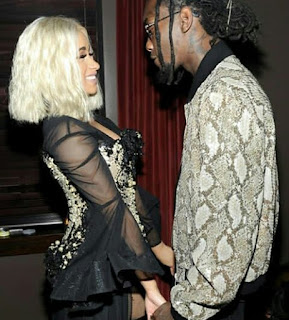 Fast rising US female rapper, Cardi b, is pregnant.
Following the steps of Beyonce, Cardi b is expecting a child with her fiance Offset.

She revealed her pregnancy bump to the world, during her performance on Saturday Night Live wearing a bodycon white gown. The show  was hosted by Black Panther ‘s Chadwick Boseman.

The two love birds officially began a romantic relationship in early 2017 when they attended the Super Bowl together. October last year, Offset popped the question in front of a sold-out crowd in Philadelphia. Of course, Cardi couldn’t say no to the enormous, 8-carat diamond ring he proposed with! 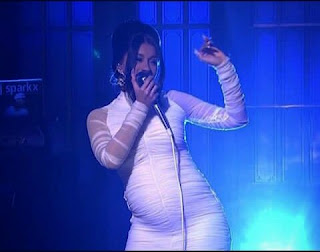 Six months later, they’re expecting a baby together. She also confirmed that the pregnancy will be due in July.
This will be Cardi’s first ever child, but Offset have three kids from separate relationships.

There was rumor of Offset cheating on her sometime ago, but Cardi rebuffed those news and said she wants to work it out with Offset.

She said in the interview,  “I know I look good. I know I’m rich, I know I’m talented. I mean I could get any man I want—any basketball player, football player,rapper,actor. But, I want to work out my this out with my man, and I have no point to prove to y’all.”
“It’s not right, what he  did—but people don’t know what I did and what I’ve done, ’cause I ain’t no angel,” the 25-year-old added without speaking further on the issue.

In previous interviews, Cardi have always said he wants a family just like every other women.

Cardi b dropped her first studio album “Invasion Of Privacy “last week, and it went gold few hours after it was released. Making her the first female artist who’s album went gold in hours.