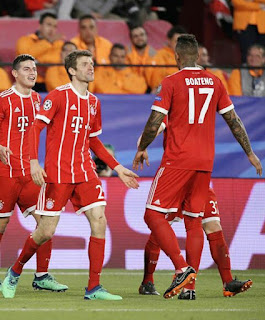 Bayern Munich were crowned bundesliga champions for the seventh successive season as they only needed a win against Augburg in their Saturday’s league match to be crowned champions.

The Bavarians defeated Augsburg 4-1 as they clinched the title for seven seasons in a roll. They’ve been the most dominant team in the league for the past decades.

Goals from Tolisso, Robben, Rodriguez and Wagner, made sure the early celebrations were not paused till the next fixture. The only goal  for Augsburg in the game was an own goal by Bayern Defender, Sule.

They proved unstoppable following last week’s 6-0 demolition of Borrussia Dortmund at the Allianz Arena. It was 5-0 in the first 45 as the away side were no more a worthy opponent as they used to be.

Next stop for the league champion is Sevilla for the second leg fixture of the UEFA Champions league. Bayern are ahead in that fixture as they beat the home side 2-1 in the first leg.