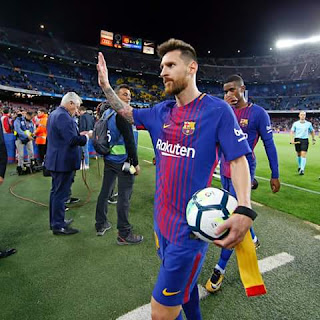 Fc Barcelona continued their unbeaten run in the league as they drew 2-2 in the Nou Camp against arch rivals, Real Madrid.
The Spanish champions opened the game with a flying start as a wonderful curling ball from Sergi Roberto finds Luiz Suarez in the 18 yard box as he slots it  beyond Navas to make it 1-0 nil in the 15th minute.
The home team dominated the possession of the game and controlled the speed as Real Madrid were struggling to find their feet in the game.
The breakthrough came for the away team as Benzema finds Ronaldo who tapped in the ball to make it 1-1 in the 21st minute.
As always the game was tensed and the referee brought out his caution cards almost every ten minute. Luiz Suarez and Sergio Ramos got into a fight before the half time break, and they were both yellow carded for their offense.

SERGI ROBERTO RED CARD
Barcelona defender, Sergi Roberto was given a straight red card for an incident with Marcelo right at the stroke of half time. The defender was seen hitting Marcelo on the face after a strong tackle by Marcelo which angered Roberto to hit him in the face. He was sent off without a second thought by the referee and the home team were down to ten men.
Real Madrid began the second half without their star man, Cristiano Ronaldo, who was substituted because of a slight injury, after he collided with his former Manchester United teammate, Gerard Pique in the first half. He was replaced by Ascensio.

Despite been down to ten men, Fc Barcelona took the lead again in the in the second half by a brilliant goal from Lionel Messi.
Real Madrid dominated the midfield and pressed more as they went in search for the equalizer.
The breakthrough came for the Blaugruana when Gareth Bale finds the net for the away team, as he converts a wonderful pass by Ascensio.
Barcelona had another chance to score a third as Messi squared up one on one with the goalkeeper, but his effort was punched wide.

ANDRES INIESTA LAST EL CLASSICO.
Andres Iniesta was subbed off in the 75th minute as he received a standing ovation from the spectators in what would be his last El Classico as he will be leaving the club at the end of the season.

BARCELONA UNBEATEN STREAK CONTINUES.
Barcelona still remained unbeaten after 90 minute of play which means they have not lost a single game in the league all season and they have only lost twice in all competition. They were eliminated by AS ROMA in the champions league and they were beaten by Real Sociedad in the Copa Dey Rey.