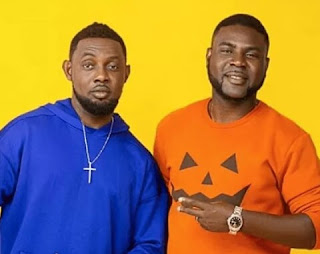 The rumors spreading fast right now around the Nigerian entertainment industry is concerning a family feud between Comedian Ay and his younger brother Lanre.

News have it that the two blood brothers was almost involved in a physical combat before the show.
Most celebrities who were present at the seen have paid deaf ears to this and they don’t even want to speak on the issue  online or even wanting to be quoted in this report because of the people involved.

A very reliable source in the industry who were at the scene of the strong exchange of words at the just concluded AY live that was held on Easter Sunday, the brothers “Ayo Makun (AY) and his younger brother Lanre Makun were almost involved in a serious fight before the event and it wasn’t resolved until the event was over”.

‘They were both involved in this very heated argument and were almost  exchanging blows back stage because the comedian found out a few days before the event that his brother had been doing some dubious business behind his back which was selling or maybe even giving out tickets to people without his consent’ a source said.
“The comic actor was very pissed that he had to do some last minute rearrangement on the table settings just to cancel Lanre’s plans and this didn’t quite go down well with the both of them” the source confirmed.
Two days before the event, AY took to his Instagram page as he delivered a stern warning to people against getting free tickets from his brother saying,
‘those of you calling @lanremakunevents asking for free tickets to Ay Live on Easter Sunday April 1st… No disrespect o! But this is not a charity organization neither Is it my birthday party or a child dedication. It is a gate taking event and huge investments that have been made must be recovered. We only give out complimentary tickets to direct supporters of the show and a few number of people whom have helped in building the reputation of this brand over the years. Kindly bear with us.

Then after the event, AY came out to apologize for the disorganize arrangements of table tickets.