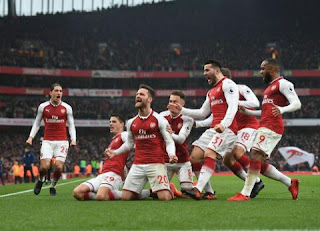 It rained goals in the emirate stadium for Arsenal as they defeat CSKA Moscow in the first leg of their Europa league fixture on Thursday night.

Four goals in the first half was just the perfect start Arsenal needs to put the game behind bars. CSKA Moscow pulled one in to reduce the gap.

The first goal came at the 9th minute as a wonderful assist from Bellerin finds Ramsey who put it beyond the away team defence to make it 1-0.
As the gunners were basking in the euphoria of their first goal, Golovin pulled one back in the 15th minute to level the score line.

A hard tackle in the box led to a penalty as Lacazette fires home from the spot kick to make it 2-1 in the 23th minute.
Assist king, Mesut Ozil provided his first assist of the game as a nice pass to Ramsey completed his brace on the night in the 28th minute.

Ozil provided another assist with a well composed pass to Lacazette who scored his second goal in the game in the 35th minute.

With Arsenal’s win, it’s almost  certain that the gunners are through to the next stage of the competition as the second leg might just be s stroll in the park.